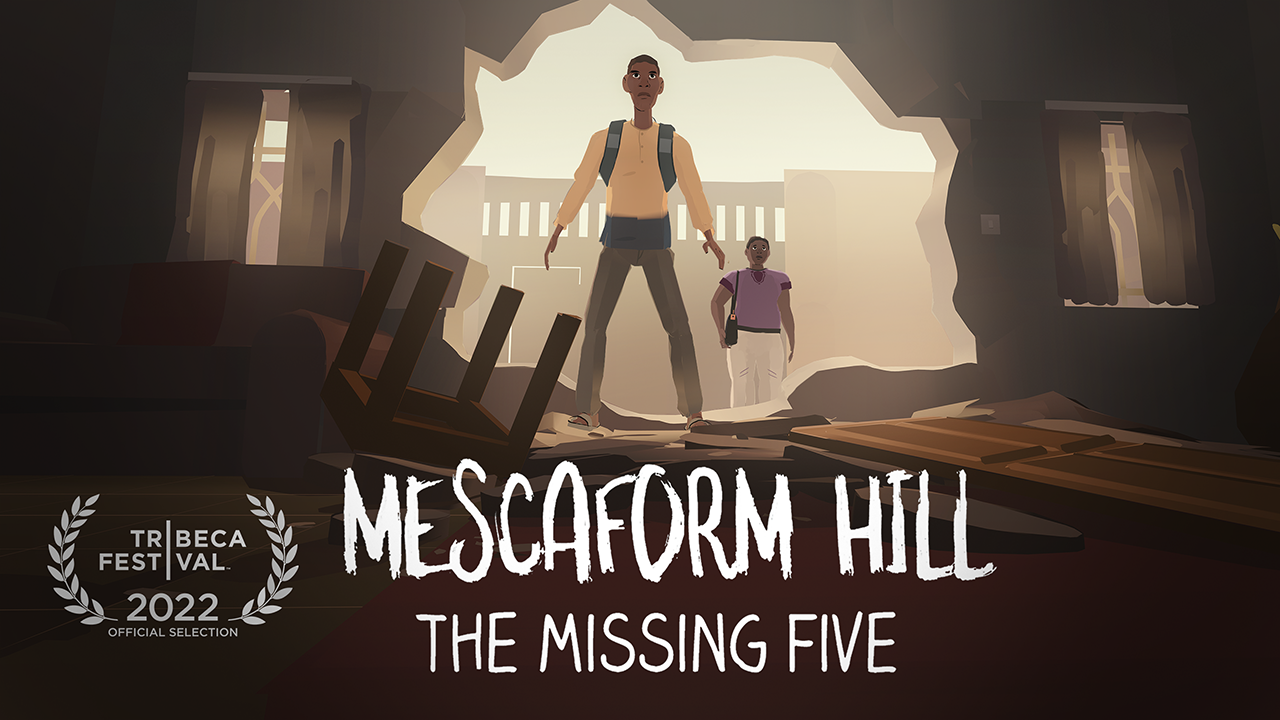 Mescaform Hill: The Missing Five is an animated graphic novel created for the Meta Quest TV Platform. The project was created by Adam Madojemu and myself, and was featured in Tribeca Immersive in 2021, as part of the New Voices Competition.

The plot follows a young Road Safety cadet who investigates the disappearance of several policemen against his superior's orders, only to discover far more than he expected.

The full project is available to watch here.

On this project, I was responsible for defining art direction and production design. What follows is a breakdown of the approaches taken to balance the project's visual goals with it's technical limitations.

This blogpost contains light spoilers for the story. I do my best to dance around plot points but I strongly recommend you experience the story before reading this.

The overall tone of Mescaform Hill oscillates between playfully offbeat and dark. In order to balance those two extremes, we aimed for an art style that was clearly stylized but retained realistic values. Something that was illustrated and clearly showed the artist's hand, even in 3D, given that we would be developing the project for VR. 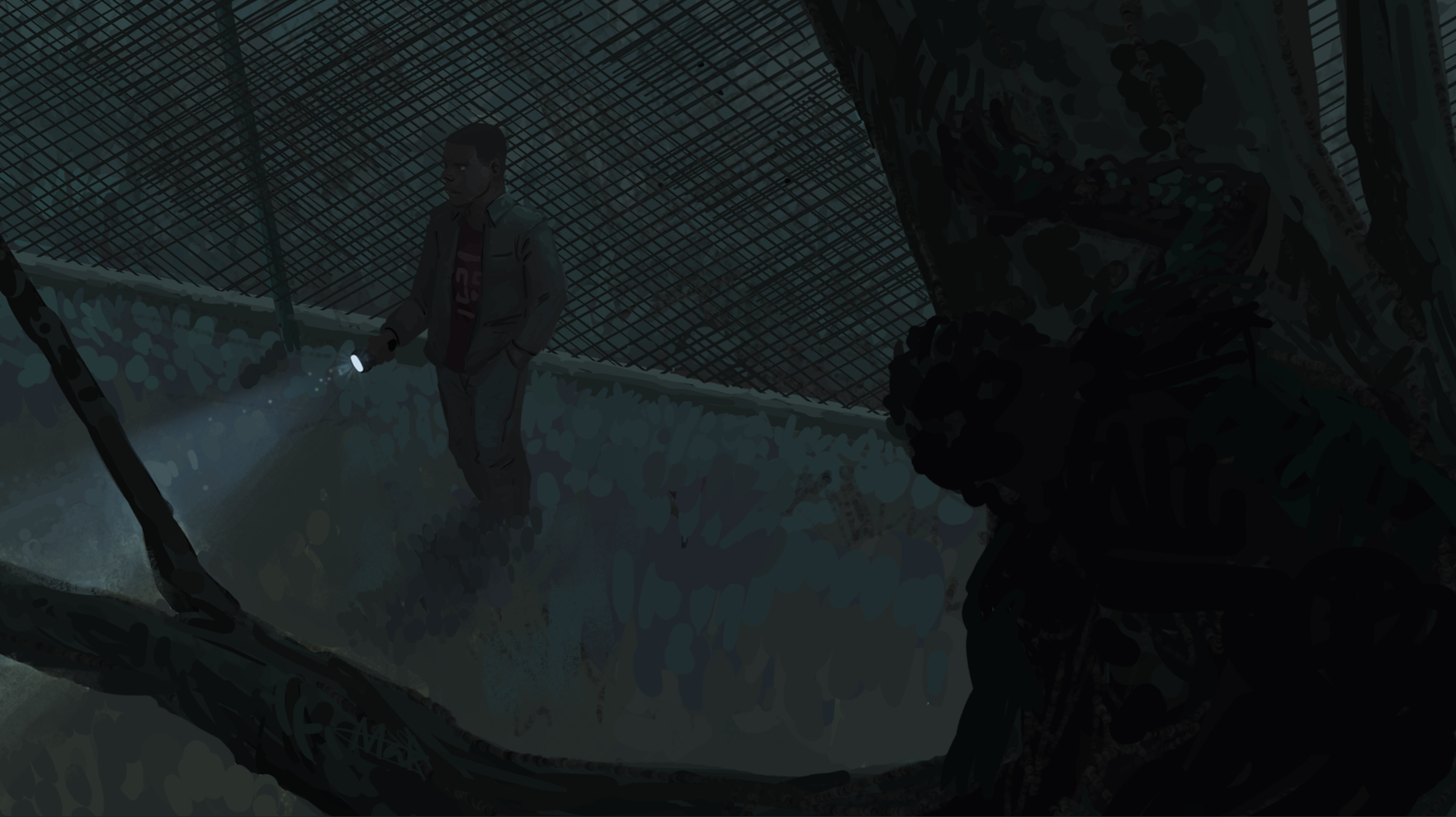 The project's form was also very important to us. In sticking to Mescaform Hill's webcomic roots, we wanted The Missing Five to be a graphic novel first, and an animated film second. We wanted to use VR to augment what comics already do, as opposed to changing what they are fundamentally. Altogether, we wanted to deliver on the experience of witnessing this mystery story in the fictional town of Mescaform Hill. 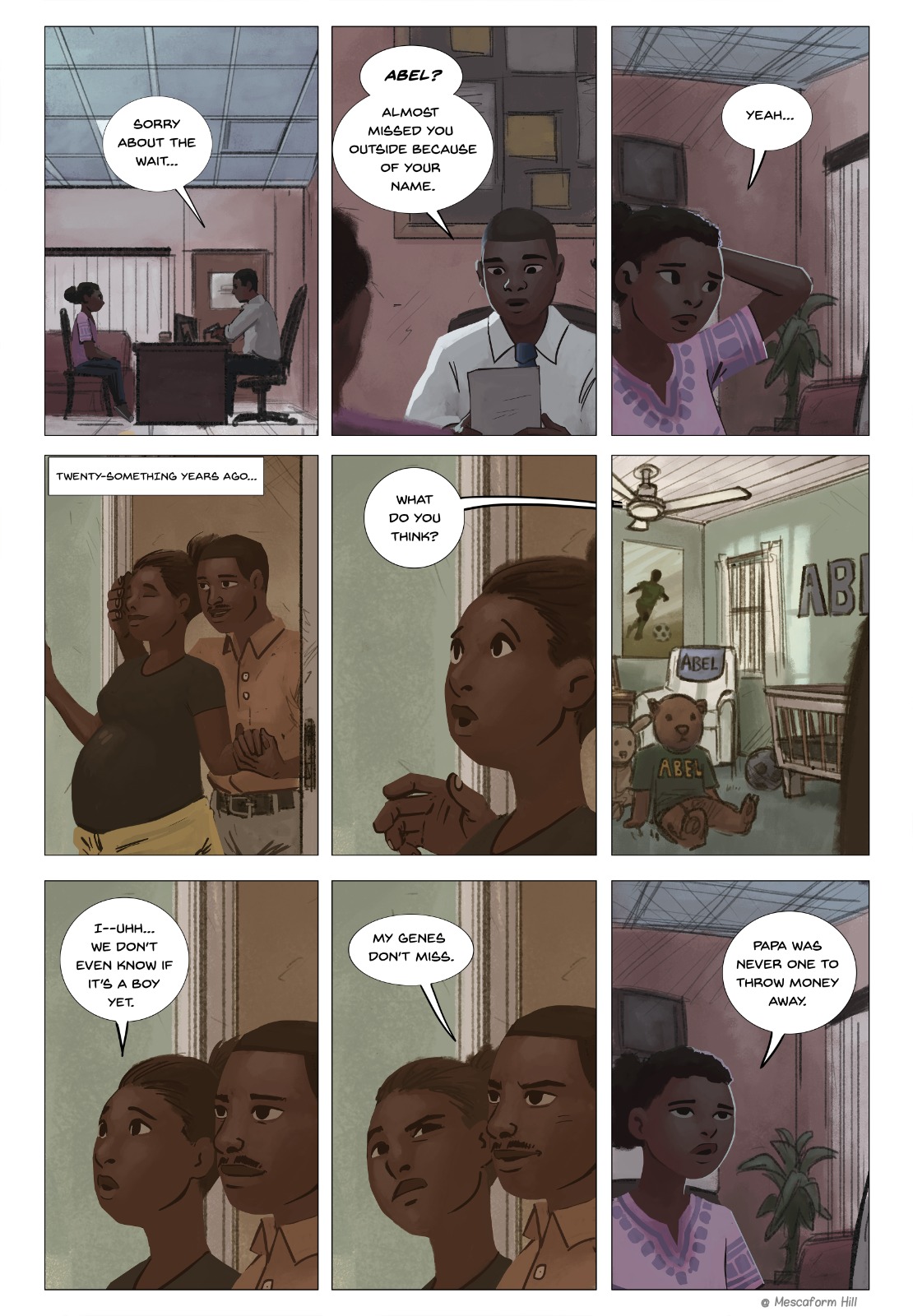 Excerpt from the Mescaform Hill Webcomic.

We based the design of the titular town on Ibadan, Nigeria, drawing inspiration from its rural neighbourhoods and forests, while at the same time, adding enough of our own elements so it could stand on its own. 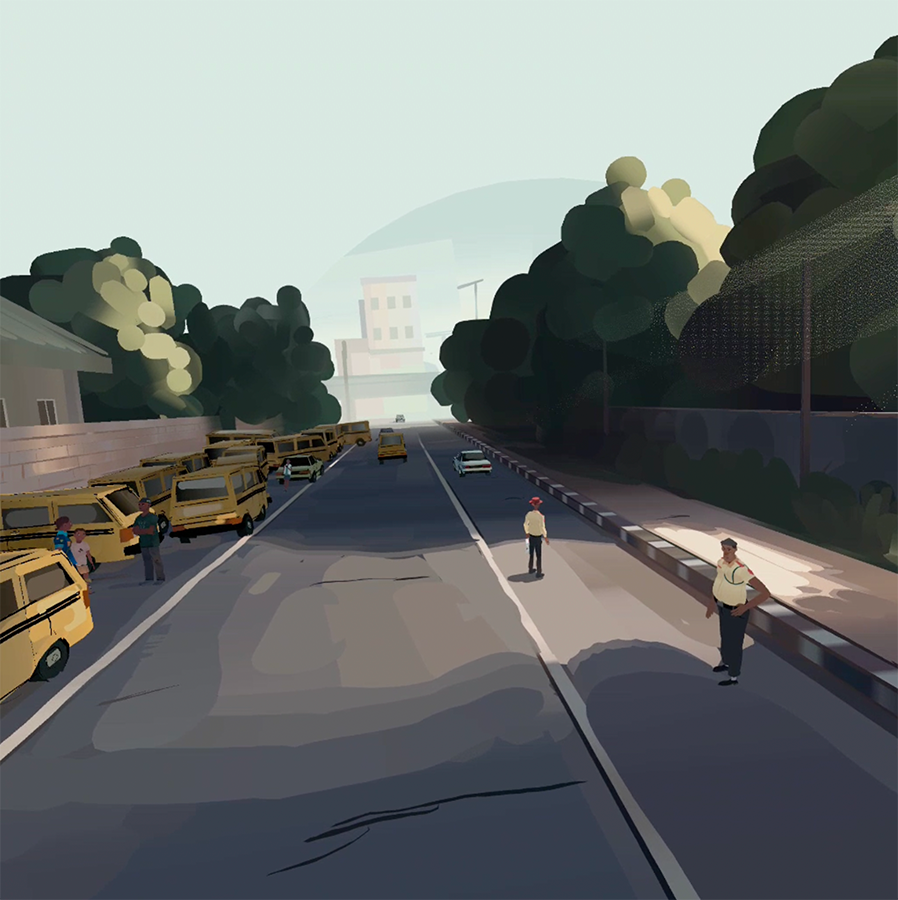 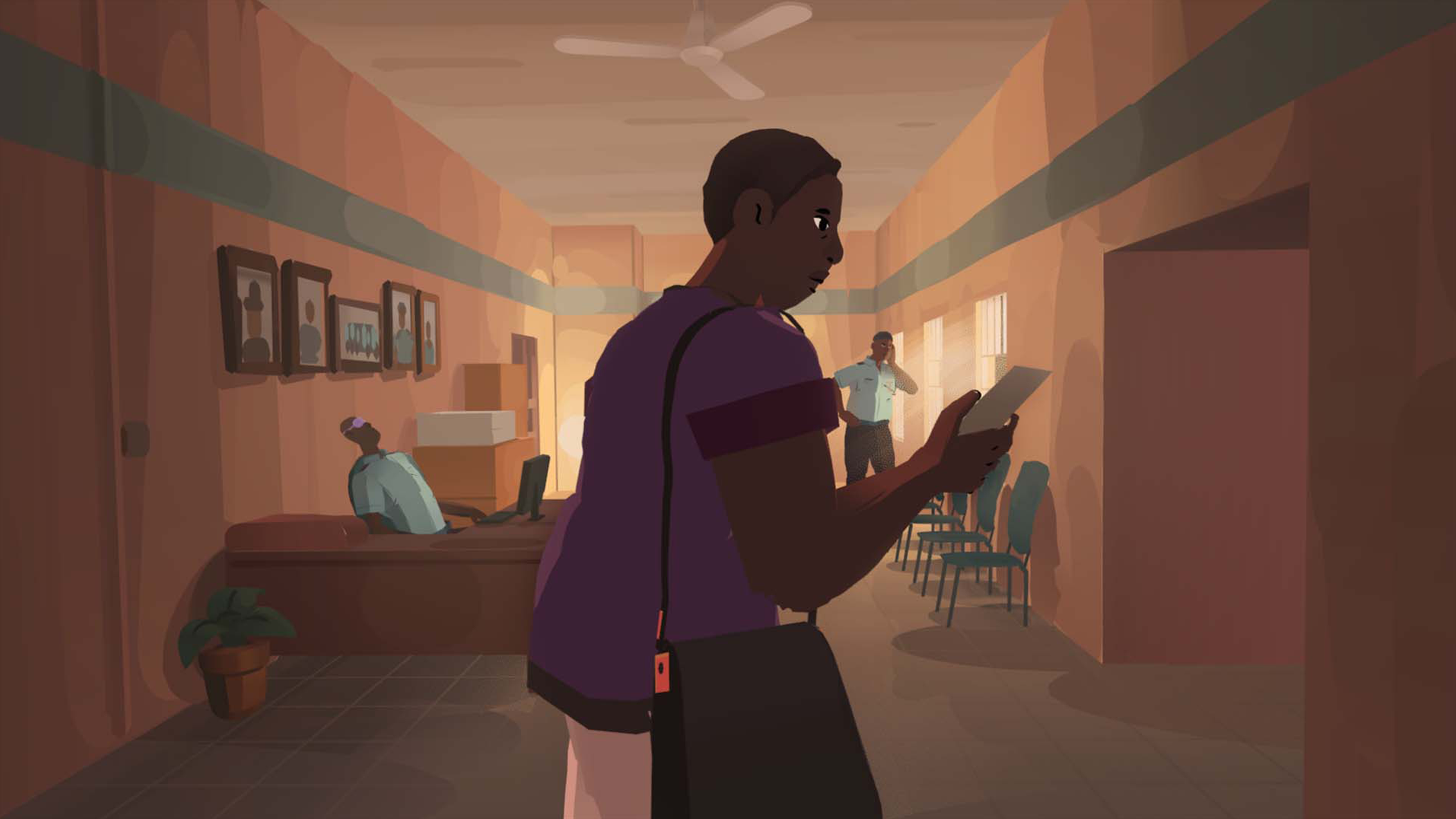 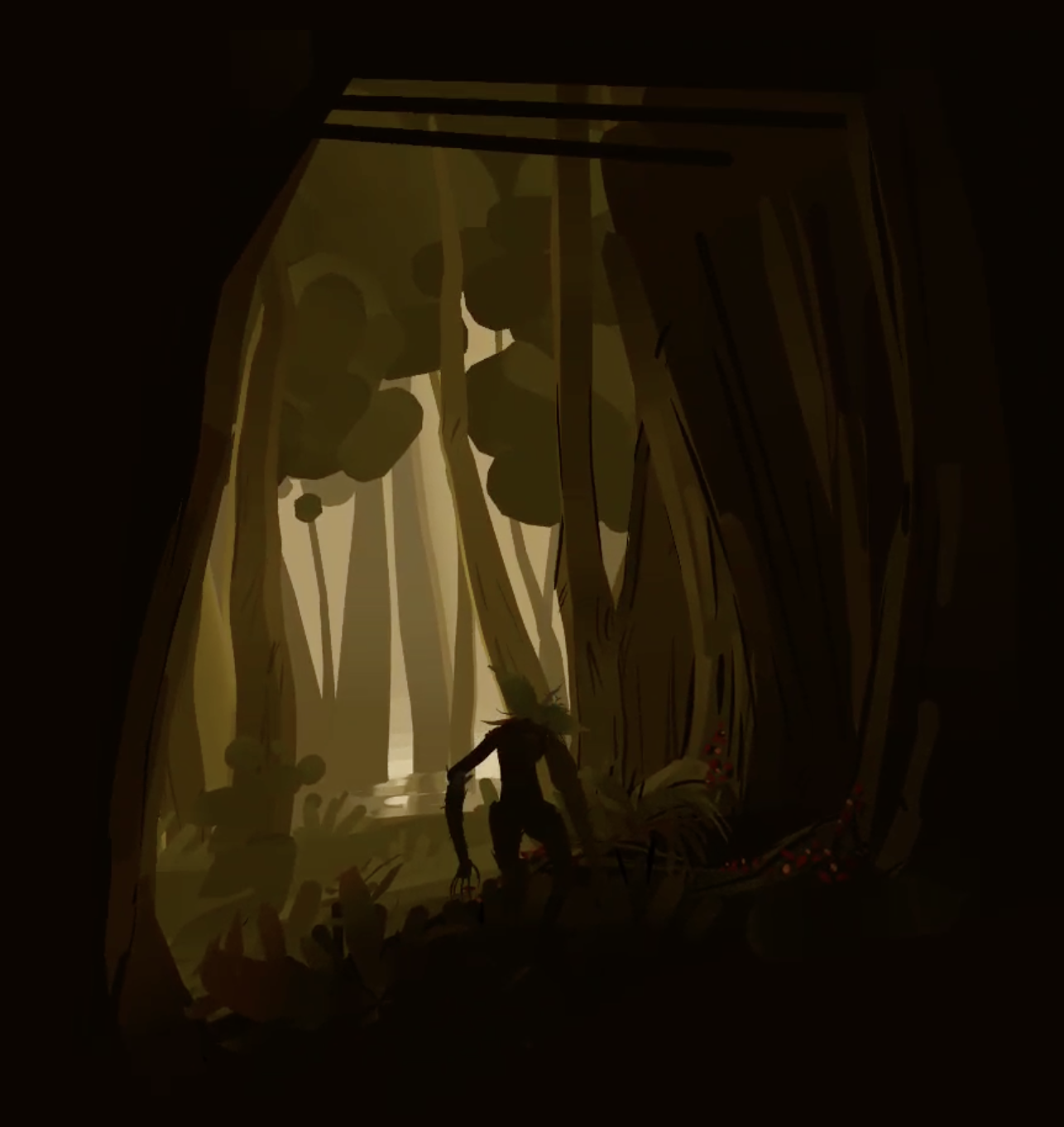 Early on, I mandated that we limited ourselves to earth tones and colour palettes when designing assets. The intention being to give the world an older, almost folkloric feel. During the process, we drew inspiration from animated media such as Cartoon Network's Over the Garden Wall. 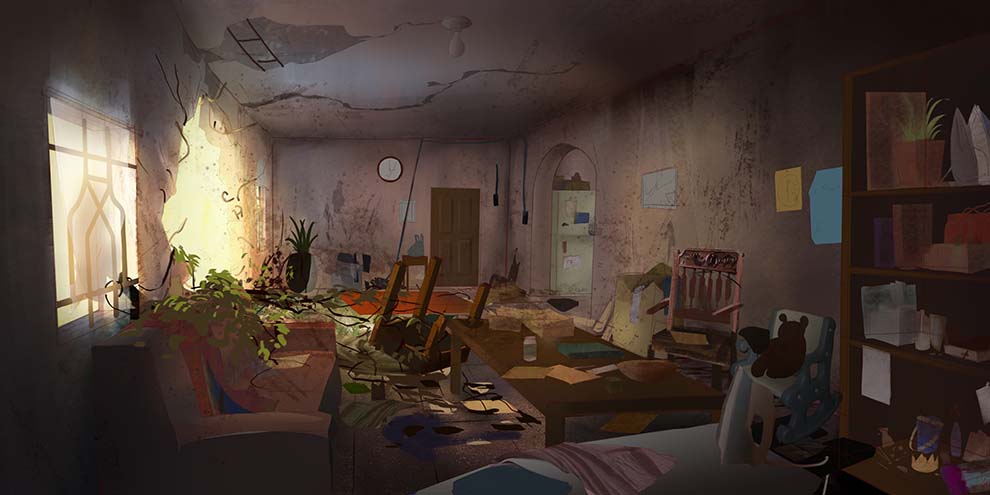 Vis Dev by Chelsea Castro. You can find more of her work here.

The project was built in Quill by Smoothstep. This made it easy to achieve an illustrated style in 3D but made optimizing our assets difficult, as assets created in Quill are notoriously high-poly. In order to work around this, our environments were built to camera, allowing us to not only maximize our triangle budget, but also ensure that our scenes maintained an illustrated feel, as we could construct sets relative to a single viewpoint.

We also had to be careful with our employment of comic panels. Quill lacks any sort of masking tools or post effects so we had to build out our comic panels and everything within them as geometry, faking the illusion of a portal. This required careful implementation in order to appear seamless in VR. 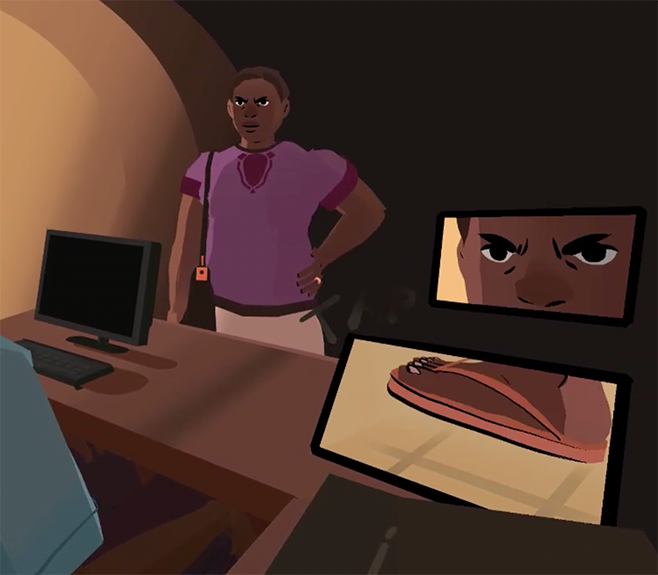 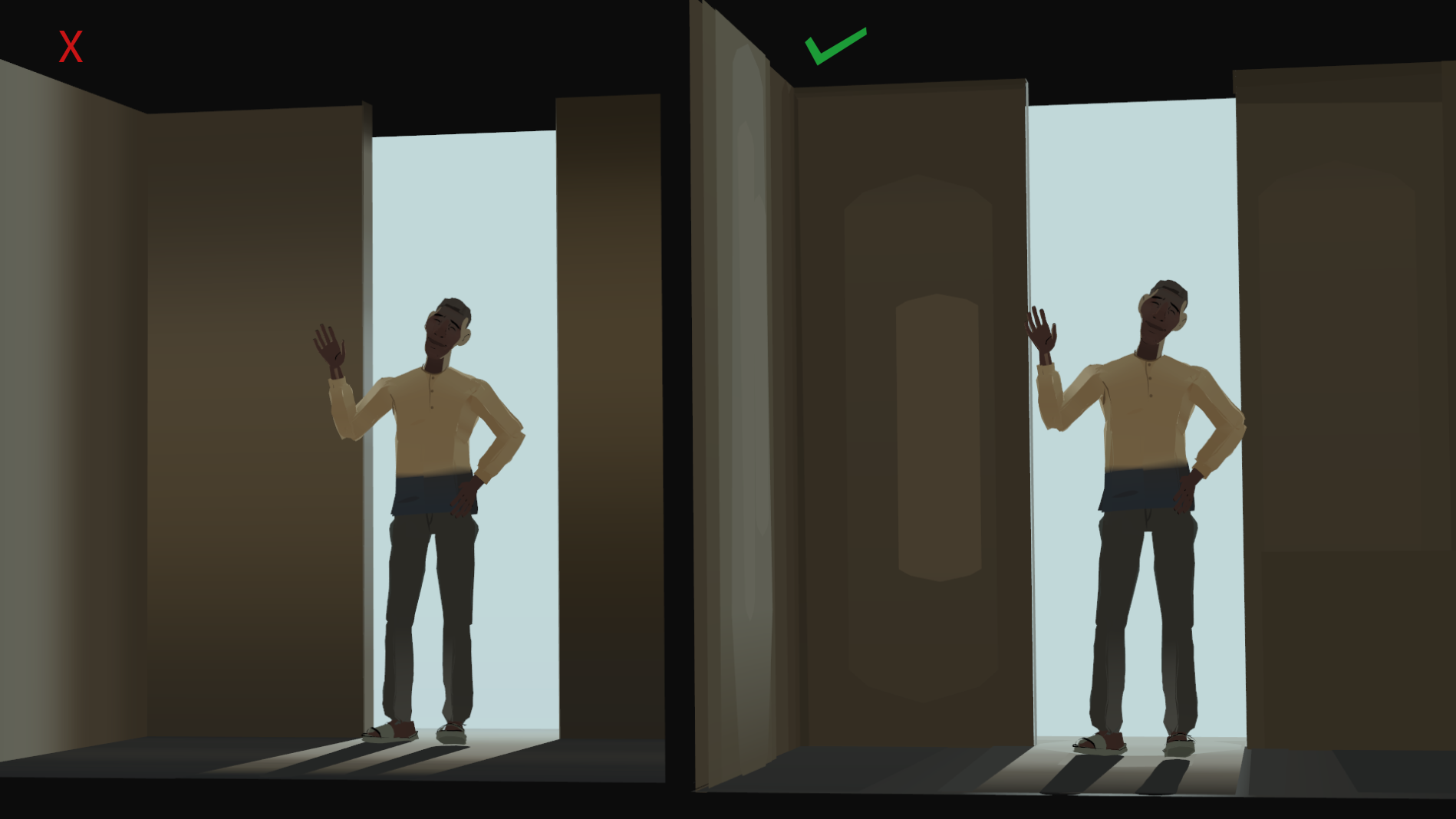 (Left) Our implementation of Comic Panels in 3D space. (Right) Our approach to Lighting our Environments.

Finally, Quill has no built in lighting features, all lighting has to be manually painted in vertex colour. In order to manage our triangle budget, we chose to avoid smooth gradients, posterizing our lighting across individual brush strokes. This kept our polycount low while simultaneously contributing to the illustrated style we were aiming for.

For our characters, we wanted to push the stylization a bit further. We wanted characters with distinct forms that were appealing in 3D but could simultaneously pass as illustrations.

A still of Ade, the story's protagonist.

More so than our environments, our characters had to be designed with technical constraints in mind. Due to our pipeline, our character rigs could not run in realtime and would have to be baked to a cache after they were animated. These caches could very easily become heavy, which forced us to keep our characters low-poly. We opted to design around this limitation, building our characters out of simple primitives, using additional brush strokes and linework to imply details where none exist. 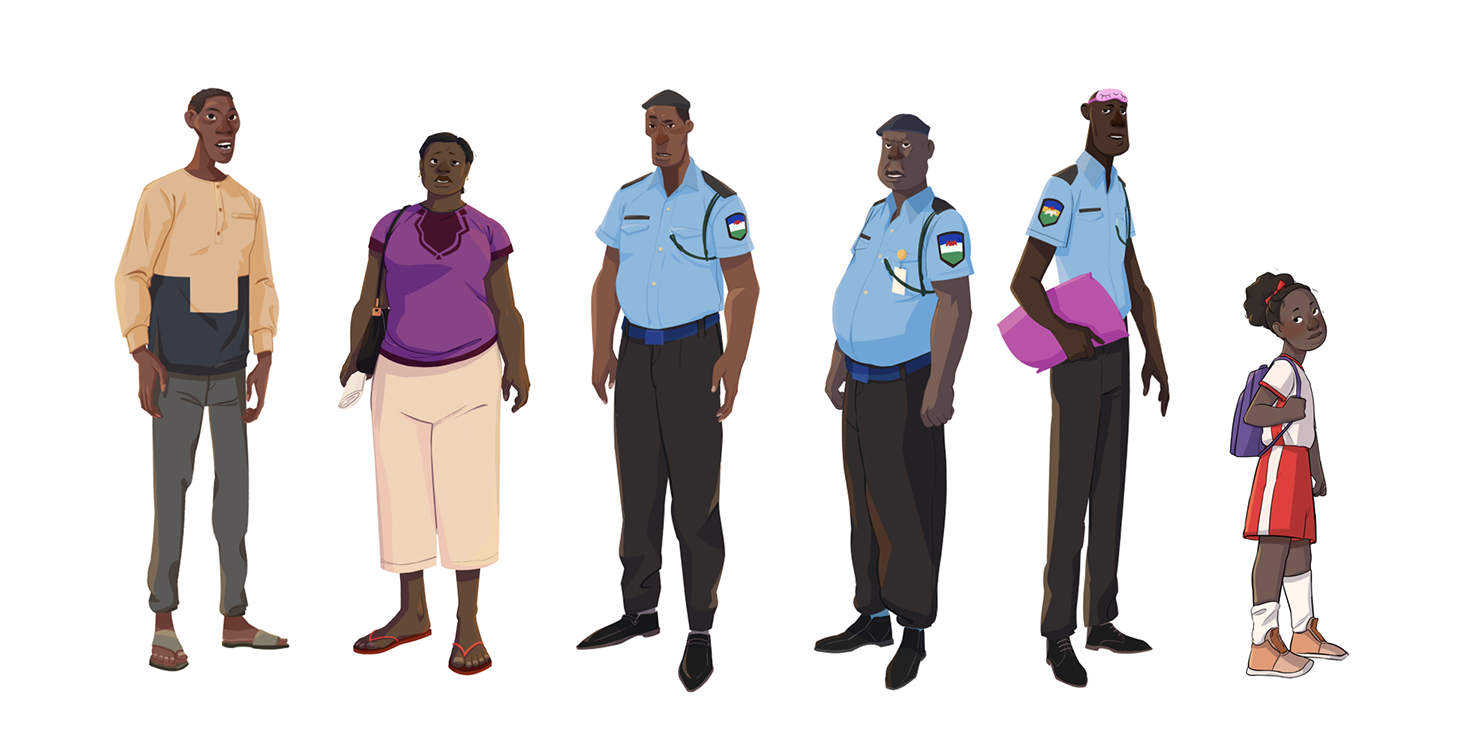 Concept Art by Vivian Chan. You can find more of her work here.

Lighting once again proved to be difficult. As characters were to be animated, we had much more to consider when it came to how we approached lighting. Keeping with our decision to employ posterized lighting, we chose to cel shade our characters, referencing the work of Studio Ghibli's films, and adding extra highlights if the scene called for it. The lighting, however, would have to be manually implemented frame by frame, so in order to make this feasible, our characters geometry was grouped into layers that allowed us to shade sections of their bodies independently. After the animations were completed, artists could adjust the shading in relation to character poses. 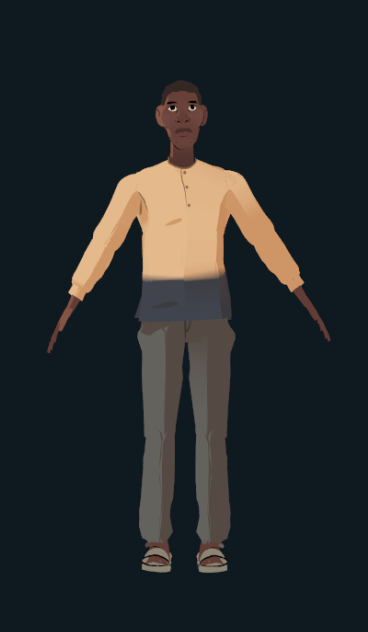 A breakdown of how we constructed our character models.

Lighting proved to be very important on this project, as unlike standard 3D pipelines, we had to define all of our lighting well before building out our scenes, or else risk creating problems and unnecessary revisions down the line. Naturally, we created a number of Color Keys for each of our scenes. 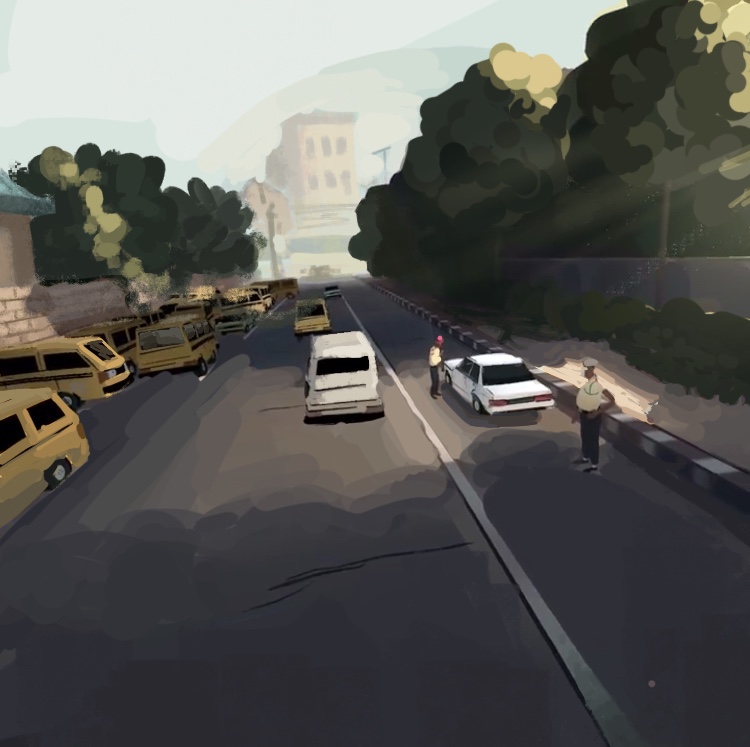 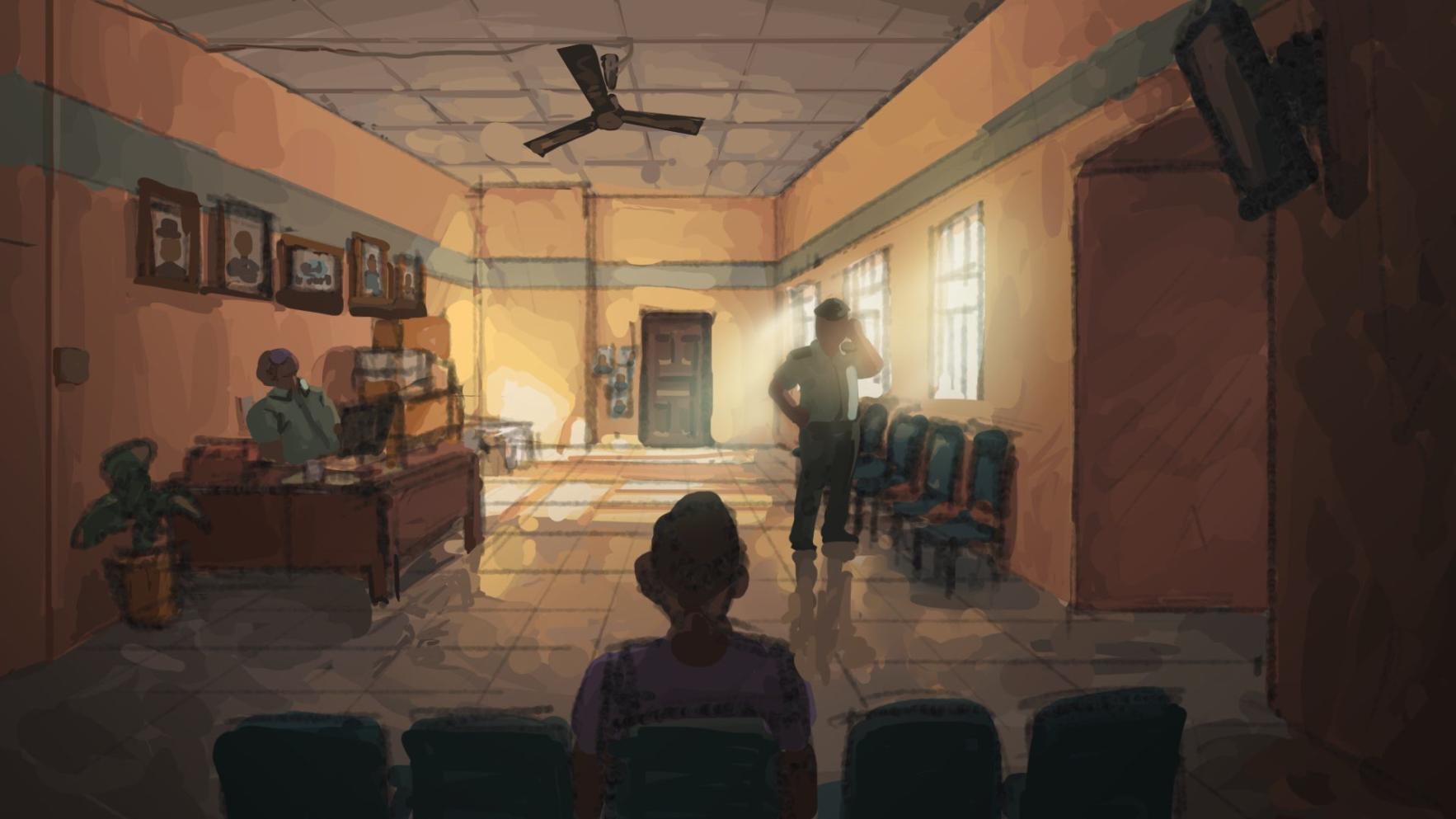 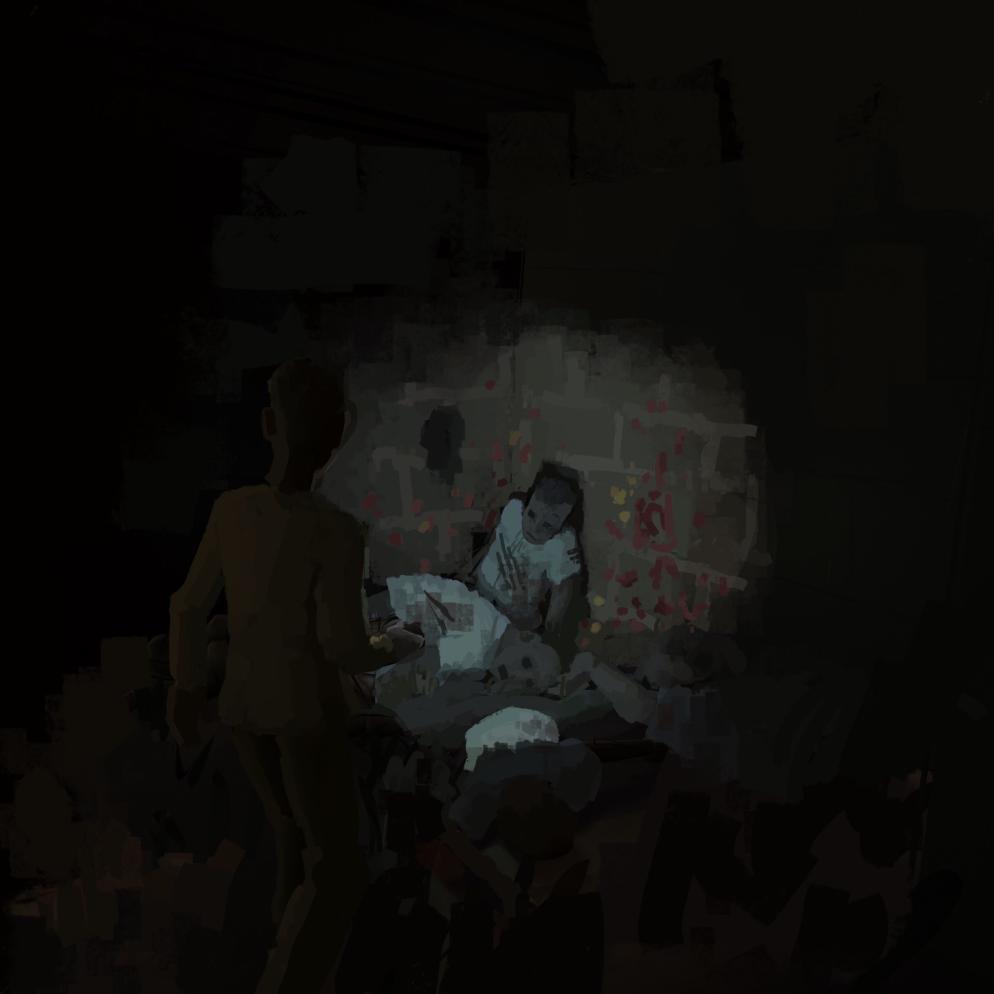 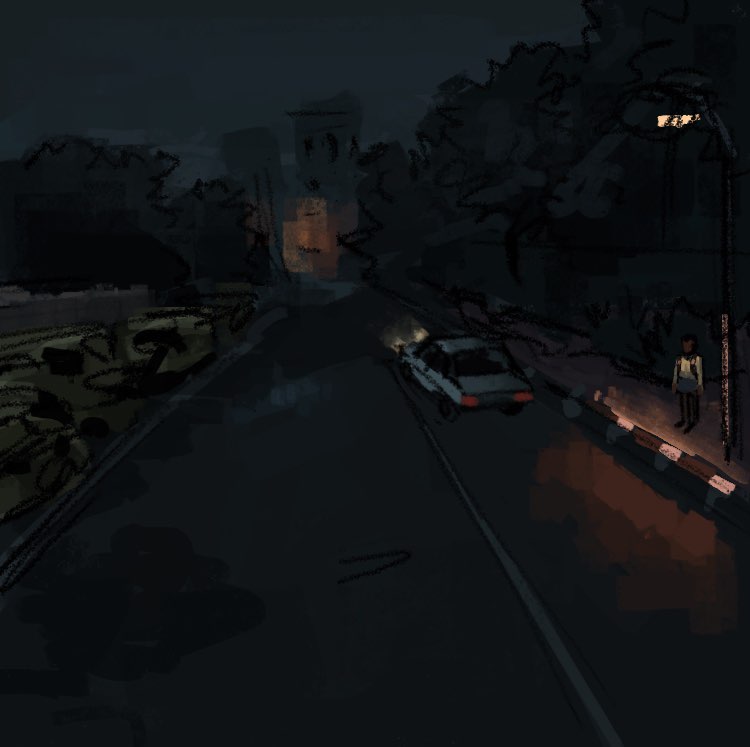 A sequence i'm particularly fond of is our flashback sequence. At this point in the story, we switch to another character’s point of view, this character being a nine year-old girl, Tinu. We wanted to make this sequence stand out from the rest of the project so we chose to depict the scene as if it were Tinu's drawings, imagining how she would recall a traumatic event.

Color script for our Flashback Sequence.

We wanted to have a "dream to nightmare" progression of the sequence, with the intensity of the sequence peaking at the "nightmare" section. As the sequence closes, we end up with visuals that are some where in-between the two extremes and more in-line with the rest of the project. In a lot of ways I think this was one of the most successful sequences in the project.

We animated Mescaform Hill mostly on 3's and 4's, aiming for a stop-motion quality to movement. Not only was this a natural way to keep with the Graphic Novel form, but it also helped us keep our project within our memory limits as fewer frames resulted in smaller file sizes.

All dialogue in the project appears as Callouts. As a result we had to be very selective with how much movement there is in any given panel, as we needed the audience to be able to read the dialogue at comfortable pace. This meant coordinating character performances with when these callouts would appear, and how.

As we locked our animation style, we didn't anticipate how difficult assembling all the elements would be when we had to lay out all our elements in 3d space. Previs Artist Vince Xi was instrumental in solving a lot of these creative problems, iterating on storyboards and layouts to define a consistent language for our brand of spatial storytelling.

An early storyboard by Vince Xi, you can find more of his work here.

Overall, I'm really happy with how this project turned out. Most of our creative goals were achieved. Common feedback i've received from audiences is that they wish they could spend longer in the environments we built (A statement that makes my day every time I hear it). And that's just the visuals, the sound team elevated everything we did here to a whole other level.

I'm very fortunate to have had the chance to make a graphic novel in VR, it had been a dream project of mine while I studied in University. None of it would have been possible without the incredible artists, writers, composers, producers, sound engineers, vocalists, actors who brought their talents together to make it happen. You can find them all listed below. 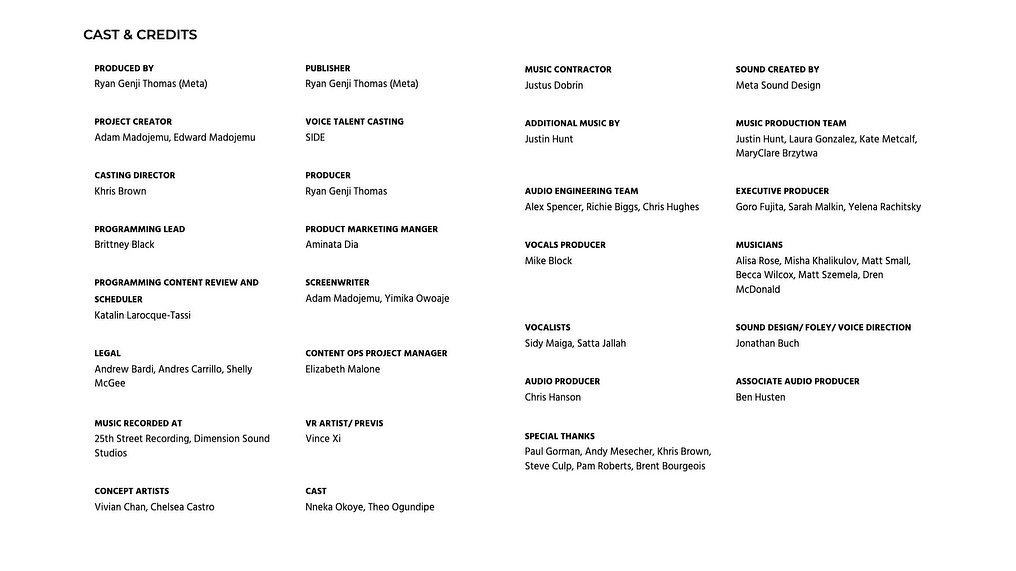